Posted on December 9, 2018 by bogotabiketours 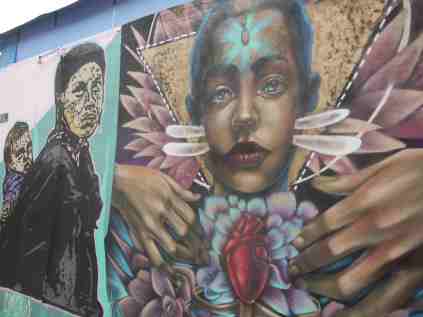 The other day, with a couple from the U.K., we did a graffiti bike tour – except that this became a mega-graffiti tour, thanks to some huge murals the city recently sponsored in Puente Aranda, a gritty industrial neighborhood which normally has very little of outside interest.

The murals, along two streets of warehouses and factories, make for dramatic scenery . However, the local residents walking past didn’t seem to pay any attention to the artwork. Perhaps that’s just because they pass by it every single day. 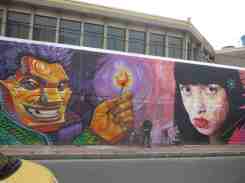 Posted on September 21, 2018 by bogotabiketours 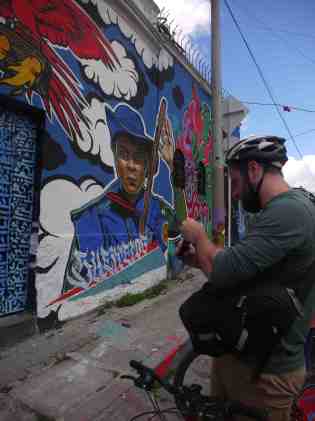 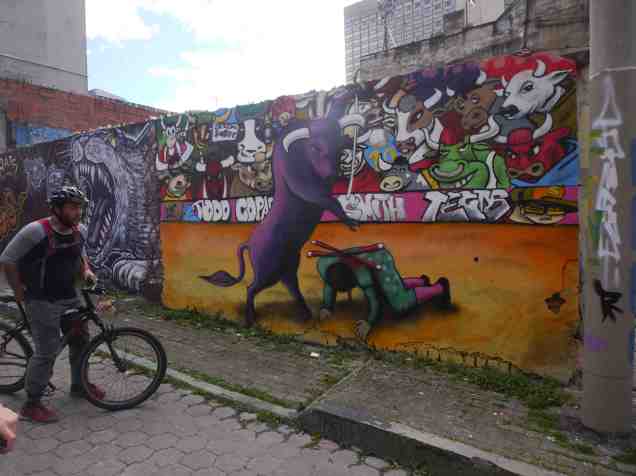 We see lots of street art – or graffiti – during our bike tours. Aand now, Bogotá has yet another graffiti street, painted in recent weeks.

The street runs between the Plaza de Toros and the Museo Nacional, below the La Macarena neighborhood, and the painting was sponsored by a local cultural center and various street artorganizations. It’s only unortunate that few people see the works, except for users of the street’s parking lots. 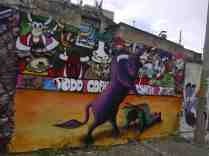 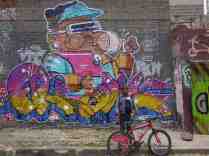 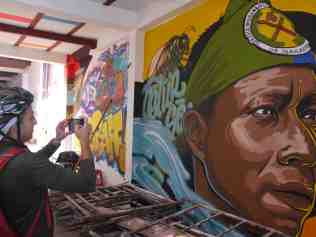 Posted on September 18, 2018 by bogotabiketours 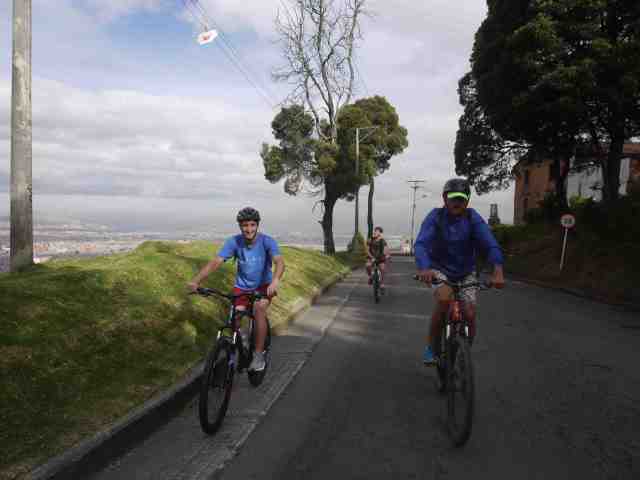 Pedaling up El Verjón, with two Canadians, with Bogotá in the background.

Bogotá Bike Tours offers mountain bike tours: a great way to get a workout, see some great views and escape from the big city! After a few minutes of riding, you won’t believe that you could be so close to the city.

The road twists and turns through the forest of pines and eucalyptus, offering spectacular views of Bogotá and its surrounding savannah – and a great excuse to stop and catch one’s breath in the thin area at 3,000 meters above sea level.

The Altimetrias Colombia blog says the full ride measures 18.1 kms and climbs 647 meters to reach 3367 meters above sea level, with an average grade of 4.12% and a maximum grade of 12%.

The profile of the Verjón climb, from the Altimetrias Colombia blog.

At the top, stop in the Marquéz del Once for a snack and a hot agua de panela – water sweetened with sugar cane popular with Colombian bicycle racers.

From the top of El Verjón you can coast back down to central Bogotá or ride north and return via La Calera, making a big loop around the city center.

This is one of several mountain bike rides offered by Bogotá Bike Tours. 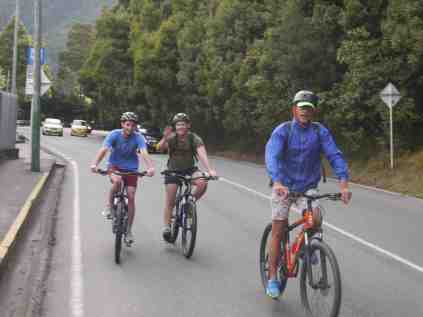 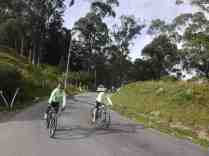 A selfie near the summit.

A stop at the top for a warm agua panela.

Posted on July 8, 2018 by bogotabiketours 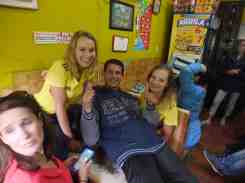 Posing with some pretty foreigners. 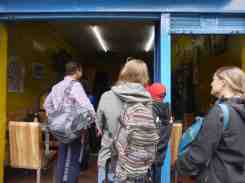 Everybody’s focused on the match. 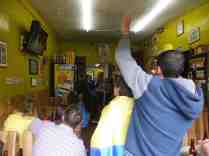 The tragedy of loss.

Our bike tours the other day got consumed by an outside force of nature: Colombia’s World Cup match with England. Once play started, interest in riding waned, and we rode from television to television, where we waited, impatiently, for a Colombian goal. We just happened to catch Colombia’s dramatic equalizer in the last minutes of regulation time in a small restaurant on Carrera Septima.

Then we rode on to the tejo pitch in the Las Nieves neighborhood. However, for once, almost nobody wanted to play Colombia’s official national sport, preferring its national passion: futbol.

The two overtime periods passed by with few goals, but lots of passionate yells from the Colombian fans, who took time out to snap selfies with the foreigners. Finally, came the passion and disappointment of the penalty kick-off, which ended with Colombia’s defeat – by a single failed penalty.

Two Boys and a Bull

During Sunday’s bike tour these two naughty boys climbed onto the raging iron bull in the Santamaria bullfighting plaza. Fortunately, the security guard was distracted.

Perhaps the bull was symbolic. After all, Sunday was election day in Colombia, and from my perspective, lots of the candidates were full of it. 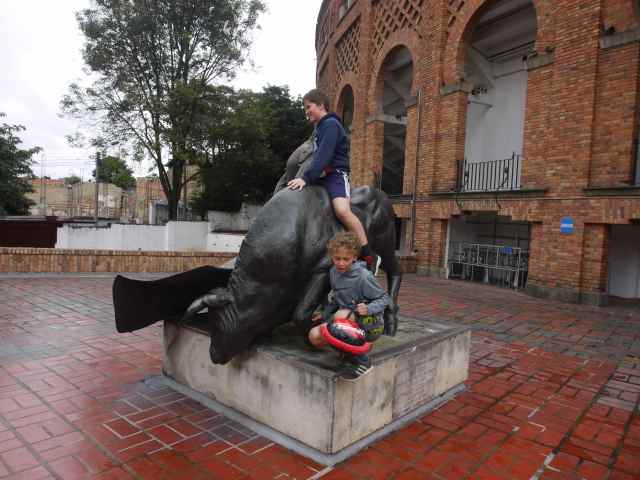 A Ducky Stop in Santa Fe

While passing thru the economically depressed Santa Fe neighborhood the other day we encountered this feathered individual. Was he a pet? Or heading for someone’s dinner plate. He appeared so at ease that he must have been a long-term resident.

What is this duck up to? 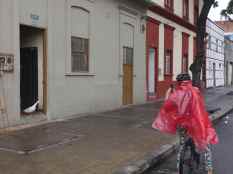 The duck has become a media star.

The duck looks over its territory.

During our tours, we always visit a traditional market, where we taste a variety of Colombia’s tasty and colorful tropical fruits.

Sometimes, we also stop and try foods on the streets or in parks.

Chontaduro, from the coast, and supposed to be aphrodisiac. 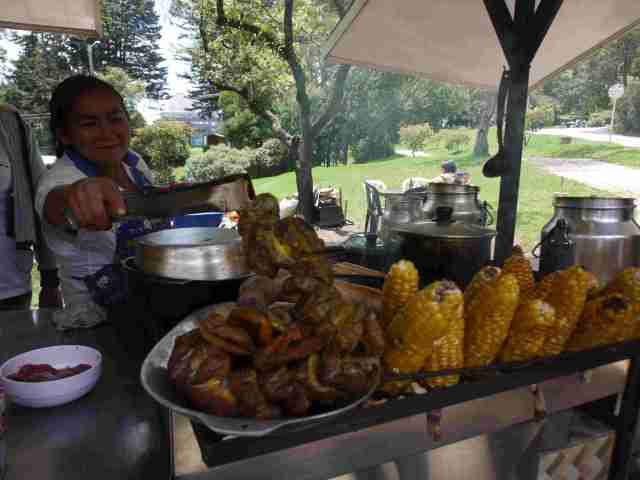 Corn on the cob, or mazorca, in the Parque Nacional.

Guama, a huge bean. You break it open and eat the sweet white cover on the black beans.

A Bathroom Full of Books 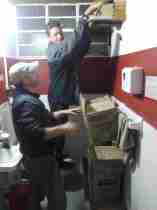 French, Dutch, German and some other languages.

The other day a Dutchwoman who lives in Bogotá and evidently loves to read gave us hundreds of books, mostly novels, in English, Dutch and French. Since we’re still waiting – 7 months and counting – for the water district to come hook our bathroom up to the main pipe under the street,  we’ve stored the books in that unused space.

Feel free to drop by and look over the collection. Books cost a few thousand pesos. 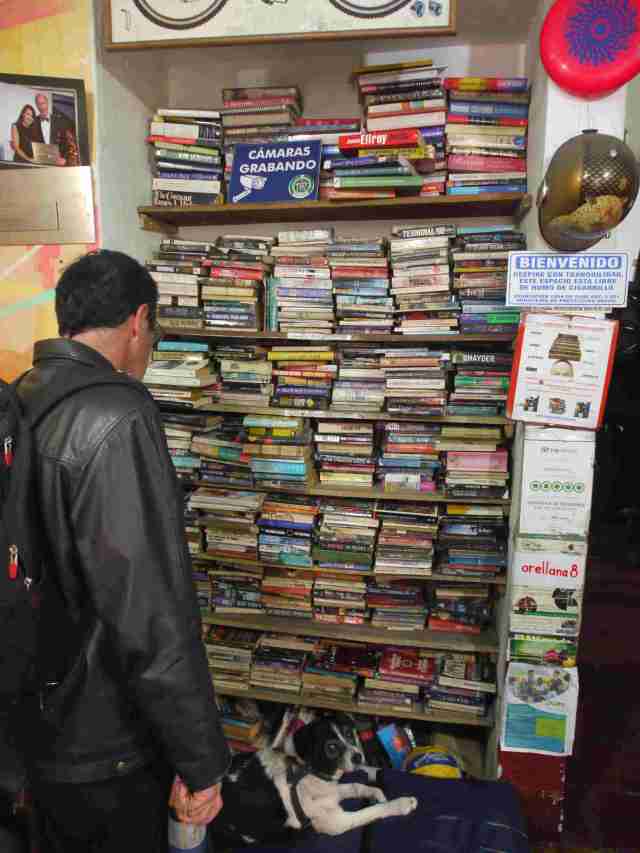 Perusing our book collection, guarded over by Parchita.

Firefighters consider themselves members of one great global fraternity. And so, after the bike tour the other day I accompanied an Australian firefighter couple up (and up and up) above La Candelaria to the Egipto neighborhood fire station.

Fortunately, the climb was worthwhile, as firefighter Iver Escobar gave us a very complete tour, in a very basic English.

A gift of uniforms. 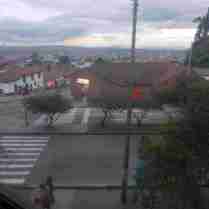 The view from the station. 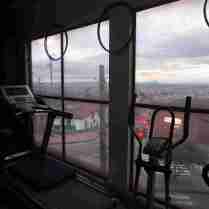 A view of Egipto, a rough neighborhood. 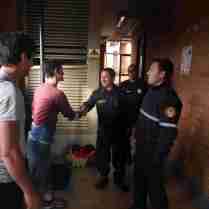 The Australians seemed impressed by the quality and modernity of the Colombians’ equipment, some of which was actually newer than what they used back home. The strategies and arrangements sounded fairly similar. But the Austraians picke up some pointers, such as tying axes and hoes together for more convenient carrying.

Melbournes and Bogotá appear to have similar proportions of firefighters to residents, altho their shift arrangements are different. In at least one way, the Colombians struck me as much more practical: they wash and dry their uniforms in the station, whereas the Australians send them off for washing – meaning that they’re gone for a whole week.

The Egipto station, one of 17 in Bogotá, is unusual in that it is also responsible for firefighting in rural areas east of the city. They helped fight the big fires in the hills two years ago. Escobar pointed out how difficult it was to use helicopters to douse them when the fires generated fierce, hot, swirling winds.

The firefighters are also sometimes called to respond to medical and other emergencies. In these cases, they usually arrive faster than the ambulances, Escobar told us. In a case of municipal disfunction, when the city calls out an ambulance over the radio, other ambulance companies listen to the broadcast and race to the scene – where they sometimes fight over the ‘client,’ obliging the firefighters to referee.

The station has a bunk room, a small basketball court, a TV room, kitchen and exercise machines. It also has a small grotto filled with Catholic saints. Firefighters, like bullfighters, have reason to want God on their side. But the men in Egipto have another motive: Many of the firefighters believe the station is haunted, and some even claim to have seen ghosts there, albeit inoffensive ones. Escobar himself heard a strange voice once late at night.

In fact, the fire station property has an interesting history. More than a half century before, Escobar said, the site held a beer brewery. And, after the 1948 Bogotazo riots, supposedly corpses of the victims were buried here, perhaps explaining the ghosts.

Escobar finished the tour by giving the Australians Bogotá firefighter jerseys – and the Aussies promised to send their own once they return home.